On Sunday, November 7, 2010, friends and supporters of Arogya World gathered at the suburban Philadelphia, PA, home of founder Nalini Saligram. There, they enjoyed a cooking demonstration by renowned chef Hemant Mathur, and learned more about non-communicable diseases (NCDs) and the public health mission of Arogya World.

Not only did everyone present wish Arogya World well, they also were moved to learn more about the central issue of NCDs, and to advocate for their prevention. Many pledges of support were made and this launch event for Arogya World was by all accounts a success.

Central to the event was the demonstration of a new recipe by Chef Hemant Mathur from Michelin starred Indian restaurant Devi in New York, and his wife, pastry chef Surbhi Sahni of Bittersweet NYC. They created exclusively for Arogya World an original recipe for a diabetes friendly, protein rich after school snack, Soybean, Spinach and Lentil Croquettes with Tomato Salsa. Hemant’s hope is that mothers everywhere will be inspired to provide healthier snack options when their children come home hungry from school. “Eating right is so important for a child’s future, and I am happy to put our creative energies to work and make a contribution to the well-being of future generations,” he said.  This recipe, an adaptation of the popular Indian road-side food called “tikki,” will also be featured by the chefs on the regular menu of their new restaurant Tulsi, opening soon in New York. 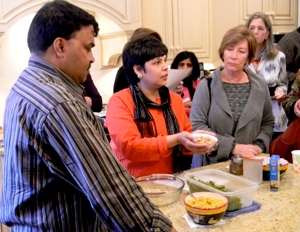 Dr. Pamela Yih, board member of Arogya World, said, ”I joined Arogya World to make a difference in public health. It has been a fun journey and I, along with other board colleagues, am pleased and honored to nurture this new organization as it takes its first steps, when it needs help most. We wish the organization and Nalini the very best.”

Dr. Manoj Khandelwal, an interventional cardiologist at the Albert Einstein Medical Center of Philadelphia, added some rich perspective on the cardiovascular risk of Indians and reinforced the need for exercise and good diet. He reminded us that heart disease is the number one killer of Americans and that the news is even worse for Indians. Overall, he said, Indians  have 3 times greater risk for cardiovascular disease than Americans. The risk for North Indians is even greater, at 7 times that of Americans. By the end of the century, Khandelwal added, 1 out of 2 people with cardiovascular disease will be an Indian. Frightening statistics!