Home » Blog » Reflections on the debut of IPA, by Swati Chaudhary, Arogya World Board Member 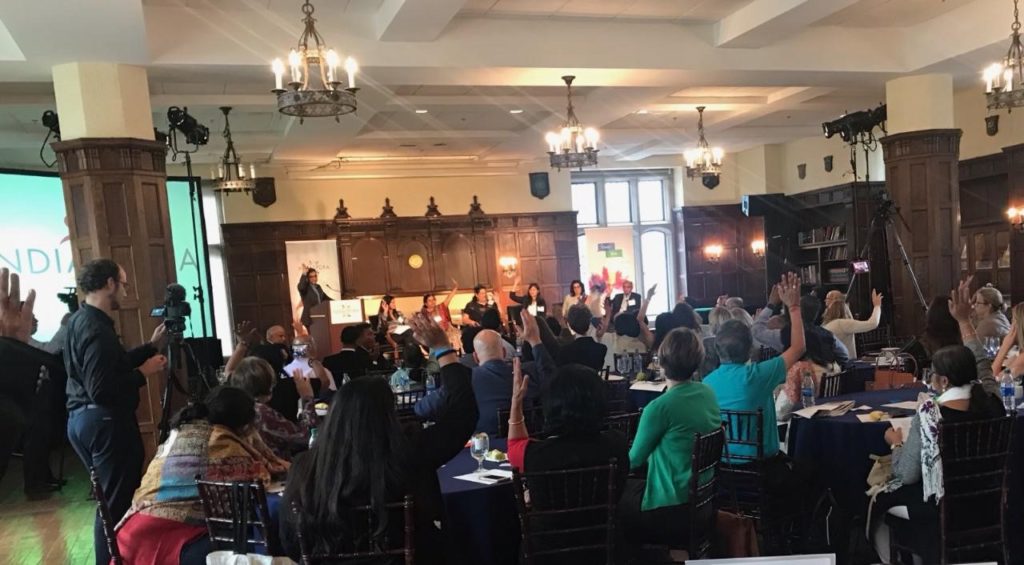 Arogya World Board Member Swati Chaudhary asks participants to raise their hand if they’ve lost someone close to them to heart attack; during the panel The Path of Collaboration: The India Philanthropy Alliance (IPA) at the Indiaspora Forum Philanthropy Summit on October 2.

I was in college; I remember exactly the time, exactly what I was doing, where I was going, what I was thinking, when I got the phone call that my father had a cardiac arrest. This phone call informed me that he was in the hospital, that he had already been in and out of surgery, and that he was now resting in intensive care unit. My mother made this phone call to reassure me that everything was OK, “don’t worry” she said, and that I should finish finals week before coming home. I don’t remember the rest of that week, nor the series of long flights home.  What I do remember is being confused and horrified at the casual treatment of it all.

Why so casual? Because we south Asians are disproportionately affected by non-communicable diseases. In particular, cardiovascular disease is the leading cause of death in India, causing one in four deaths amongst Indians.[1] ONE IN FOUR DEATHS!! At a gathering on Oct 2nd convened by Indiaspora, I asked a room of 60 people how many knew someone close to them that had diabetes, and I swear close to 40 hands went up. When I asked how many knew someone who had a heart attack, about the same number of hands went back up. When I asked how many people had lost someone close to them to heart attack, it was disturbing to see a large wave of hands stay up, including mine.

However, the feature of last week’s Indiaspora’s event was not diabetes or heart disease – it was collaboration! At the event, I was representing Arogya World, a non-profit on a mission to “change the course of chronic disease,” where I have the privilege of being a board member. Our conversation centered on Indian Philanthropy Alliance (IPA), of which Arogya is a member. Arogya’s membership comes with full humility that no single organization can move the needle on chronic disease (or any systemic issue). We need partnerships. Hence, we kicked off IPA on Oct 2nd with 10 other organizations, to harness the power of collective impact. On the surface, Arogya’s work fits neatly into the bucket of Sustainable Development Goal # 3: Health and Wellbeing, specifically Target 3.4 working in non-communicable diseases. However, when we join an Alliance of 11 organizations, we zoom out and shift the conversation to SDG 17: Partnerships for the Goals.

SDG 17 is jet fuel for all other SDGs. It unlocks the potential to take a systems view, work with partners across a system, and move the needle on every SDG. Collaboration is not easy. It requires effort, thought and serious intentionality. But if done right, alliances like IPA can lead to more meaningful public policy conversation with governments, more learnings, more clout, deeper action, and more fuel. IPA holds the potential for Arogya to be in service of several SDGs that contribute to the proliferation of non-communicable disease – amongst them poverty, education, hunger and malnutrition, climate, and of course health. Collaboration has the potential to amplify every member’s impact, and we are looking forward to IPA unfolding.

Admittedly, conversations about partnerships, SDGs and public policy threaten to be so dense, that (like many people) I sometimes struggle to stay personally connected. But this one has a straight line to me. The fuel from SDG 17 powers Arogya’s ability to impact SDG 3, which means healthier and longer lives for a great number of people in India. Collective impact can accelerate us towards a future where deadly chronic diseases are better kept in check. It’s a future with less diabetes, fewer instances of high blood pressure, less heart disease.

Moving the needle on chronic disease has personal meaning for me. It means more time with people I love. Allow me to share that the aforementioned heart attack was not my father’s first (nor his last). This time he recognized the symptoms from his previous bout and whispered to my mother “I am having a heart attack.” He was rushed to the hospital where doctors commended him on his self-diagnosis. The story of my father – the parent who made me eat my greens, a person of acute senses, who brisk-walks every day, a man of Indian descent, so accustomed to the feeling of near-death, who now lives in India with my mother and a pacemaker – is a casual story by all Indian standards.

We need to put an end to the casual nature of chronic disease in India, and fast. The revered economist Amratya Sen has said “poverty is not just a lack of money; it is not having the capability to realize one’s full potential as a human being.” So, what’s poverty if not having to go before it’s our time. Against this grim view, partnerships offer hope for change; I am hopeful for more time with people I love, and for a better future for Indians everywhere.