A report on our July 11, 2014 event hosted by Arogya World to present preliminary findings of our global survey of 10,000 women

Meet Amelia. She lives in Chuburna, Mexico, and suffers from both hypertension and diabetes. Complicating this struggle is the fact that she is the caretaker of her aging parents—a mother who is bedridden from stroke and a father who is blind. Furthermore, she and her family cannot afford to pay for the care and support they all desperately need.

Amelia’s story gives voice to how millions of women around the world —often in more ways that one—cope everyday with non-communicable diseases (NCDs) such as diabetes, heart disease, cancer and chronic lung diseases. 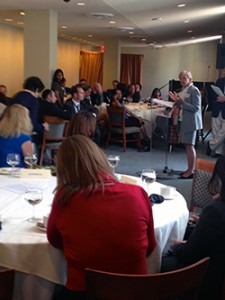 Sally Cowal of the American Cancer Society addresses the crowd.

On July 11, Arogya World held a roundtable discussion at the United Nations to present and discuss the preliminary findings of our global survey of 10,000 women on the impact of NCDs. More than 60 people attended the event, which was co-sponsored by the governments of United States and Mexico and implemented in collaboration with several like-minded organizations. It was a true multi-stakeholder discussion, with about a dozen Member State representatives, four UN agencies, several public health thought-leaders, and non-profits from women’s health and NCD organizations, weighing in on what the survey means for the future of our world.

We opened the session with the video of Amelia, which was produced in collaboration with the Partnership to Fight Chronic Disease. Our survey and the video telling stories like Amelia’s allow us to honor women’s struggles, put a human face on NCDs, and inspire us to continue our mission of changing the course of chronic disease.

Dr. Nalini Saligram, Founder and CEO of Arogya World, welcomed the group and provided an overview of the survey’s findings:

We have published preliminary survey data, as well as an infographic showing the financial impact of NCDs on women on our website. 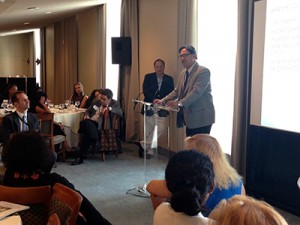 Ariel Pablos-Mendez of USAID said we need to give youth the info they need to care for themselves, improve their future.

Several prominent guests then provided comments on the survey, and its implications for women and NCDs:

We closed with a powerful video message prepared especially for Arogya World from HRH Princess Dina Mired of Jordan, who said: “The [Arogya World] survey then takes the analysis deeper and sheds light on the extra burden on women for being, simply, women—who are the caretakers of their families and how their lives are made so much harder and even impossible as they face NCDs.”

We are grateful to Jeff Sturchio, the President and CEO of Rabin Martin, for expertly moderating our event, making sense of the many different perspectives, and for keeping the audience engaged throughout. We also thank him for his wonderful piece in the Huffington Post on women and NCDs. Many thanks also to Ken Gaalswyk from Abt SRBI, for the analysis of the results from our survey.

Next steps include finalization of the survey report, and proper launch in September. Stay tuned for more information and more videos in the coming months.

More photos of the event can be viewed on our Facebook page.