The last few weeks have marked a period of great advances in global health.

First there was the historic 66th World Health Assembly, where the famous Omnibus Resolution on NCDs, non-communicable diseases, was passed on the 27th of May, with 41 countries from all regions of the world co-sponsoring it. Then a few days later on the 30th of May, came the release of the Recommendations from the High Level Panel of Eminent Persons on what the world’s development goals could look like (the Post-2015 agenda). Other big meetings also occupied the world stage – the Women Deliver Conference in Malaysia (end May) and the Nutrition Summit in London (early June). Exciting times indeed for those of us who work in global health and development. 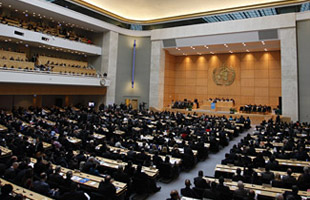 The World Health Assembly (20-28 May 2013) held at the Palais De Nations in Geneva was dominated by NCDs. There was a sense of history being made and it was wonderful to see how countries rallied around NCDs, judging from the statement after statement being read by Member States professing support for action against NCDs. It was also exciting that the US play a lead role at this meeting and co-chaired the drafting of the Omnibus Resolution. After a week of intense negotiations and paragraph by paragraph review, what was agreed included –

i. The world’s NCD goals – actually 9 goals and 25 targets that form WHO’s Global Monitoring Framework for NCDs and that had in essence been agreed to last year – this year it was a formal endorsement of the same

ii. WHO’s Global Action Plan on NCDs with actions that must be taken by Member States to meet

iii. A commitment to gain agreement by the end of this year on more details of the Global Coordinating Mechanism and how we will ensure that countries will keep their promises. So while this third leg of the Omnibus Resolution was not quite agreed to at this meeting, still incredible progress was made in the fight against NCDs. The world’s leaders showed that even in the case of something as hard to tackle as NCDs, they mean business. And for us, citizens of the world, that was gratifying.

Kudos to the team at NCD Alliance for tireless advocacy work in this regard. It was a job well done.

But NCDs were not the only topic of discussion at the WHA. See more here.

Many other big topics were discussed, and given enough time for serious deliberation, and the world went further this May on mental health, disability, vision, universal health coverage. It was also refreshing to see WHO give air time WHO reform. The Post-2015 agenda and health and NCDs was the topic of many interesting sessions. A key well attended side event organized by WHO was the one on mHealth and NCDs (Wed 22 May) in which Costa Rica unveiled plans for a smoking cessation mHealth program they are currently implementing.

Key take-home lessons for me from Geneva were:

1. Partnerships are key for success in NCDs.

It was refreshing to see Dr Margaret Chan, Dr Douglas Bettcher, Sir George Alleyne and other leaders declare that it is OK to work with the private sector, in fact it is important to do so, with both pharma and food companies. They also emphatically stated we should not work with tobacco companies. This was the clearest articulation I had heard from our leaders on this issue. I have long felt that food and beverage companies in particular have stood on the fringes of the NCD dialogue and not really eng

aged substantially. Their argument has been – well, we are not given a seat at the table. At this World Health Assembly, I heard a clear invitation issued to the private sector to join the NCD community and find real solutions to one of biggest health and development challenges of the century. I am eager to see how the food companies will pick up this gauntlet.

2. End of world poverty is a possibility.

Jim Kim, the head of the World Bank was an invited speaker at the World Health Assembly and he talked eloquently about how we could eradicate world poverty in a generation – (ie reduce the number of people living on <$1.25 a day to 3% by 2030). He argued that Universal Health Coverage – where everyone in the world would have access to health insurance and not go deeper into poverty by having to pay for catastrophic healthcare costs – would be a key solution. I learned that “out-of-pocket health spending forces 100 million people into extreme poverty every year, and inflicts severe financial hardship on another 150

million”.  What is a matter of pride is that my generation is confronting this big challenge head on.

“A generation must rise that will drive poverty from the earth.  We can be that generation”. – Jim Kim, May 21, 2013 Geneva World Health Assembly.

Dr Kim, we agree – thank you for inspiring us. We are excited that global poverty can end in our lifetimes.

A few thoughts on The Post-2015 agenda. The UN High Level Panel of Eminent Persons made a recommendation to the Secretary General on the 30th of May on a universal agenda to eradicate extreme poverty and deliver on sustainable development, after the Millennium Development Goals expire in 2015. They had done a lot of homework on this, had held several consultations around the world with various stakeholder groups including civil society over the last year, and ended up suggesting 12 draft goals. The top goal is eradicating extreme poverty. Women’s issues and women’s health are given considerable attention, as are food security and good nutrition. NCDs are included in the Ensure Healthy Lives goal, but I believe not given their due weight.

It seems to me that we in the NCD community are good at talking about NCD issues with each other and in the health and policy circles we operate in – that is why NCDs featured prominently in the World Health Assembly discussions. But just 3 days later in a major world report, NCDs did not fare well. We have to get much better at getting the rest of the development community and the world’s leaders to understand the sheer impact NCDs could have on the world’s future. Much more and sophisticated advocacy, with greater political firepower, is called for on NCDs. Still, May was an excellent month for NCDs and we can feel good about how we collectively advanced the issue.

We thank the Global Health Council for giving Arogya World the opportunity to attend the World Health Assembly as part of their delegation.