Dr. Francine Kaufman is a fierce diabetes advocate. A pediatric endocrinologist, Kaufman is a distinguished researcher in the field of childhood diabetes, known for her intelligence, energy and dedication to diabetes care, research and advocacy.

As a member of the Arogya World Behavior Change Taskforce, Dr. Kaufman is helping us to develop programs and interventions to help the world confront the rising tide of NCDs – including diabetes – one community at a time.

She’s been writing about her experiences in post-earthquake Haiti. With her permission, we’ve composed the following excerpt from one of her letters from the field, and encourage you to read more on The Loop, Medtronic’s diabetes blog. There, she is writing about her travels and the incredible work she is doing with the Haitian Diabetes Association to help the children of Haiti learn to live with diabetes. We’re featuring this Faces of NCDs story because Dr. Kaufman is personally providing young people around the world lifesaving lessons in disease management. 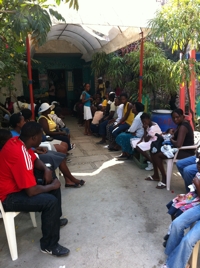 Haiti looks better than on our last trip one year ago. There is less rubble, less desperation – more hope. But with that said, there are still tent cities everywhere, the biggest across from the collapsed Presidential Palace.

On our third day we got to the diabetes camp in time for morning bloods and breakfast, after which we started our diabetes education program.

We stood in the middle of a classroom in what would have been condemned as a school at home and had a lively discussion about diabetes with the 27 campers… One of the 12 year old girls drew a picture of a girl with a huge downturned mouth and tears streaming down her face. Candy was boxed out and broccoli was on the table. When she started to describe it, she burst into tears. No one made fun of her. The older boys chimed in how they cried – and many said they still do. The older girls told her it was ok to cry and that it gets better. They brought her into the group, and by the end of the session, she actually smiled for the first time. We have appreciated that kids with diabetes around the world are the same…remarkably empathetic and caring…a wonderful “complication” of having diabetes.

It was a full day. Three of the kids are orphans, most don’t have refrigerators, they skip insulin a lot if they think they aren’t going to have food that morning or later that day. They live in the tents and horrible hovels throughout Port Au Prince, many have lost family members and friends in the earthquake, but they have ribbons in their hair, go to school or work and still somehow manage to deal with their diabetes as best they can…with two strips a day to measure their glucose (should be 6-8 per day) and an insulin preparation that should be banned for kids with type 1 diabetes…but that’s all they can get, and that’s what keeps them alive.

We have left Haiti, but in many ways Haiti has not left us. It is hard to describe the effect that an experience like working in Haiti has on you. Most of the time you feel overwhelmed with the enormity of the problems encountered by the average Haitian, let alone a child living in Haiti with diabetes.

On our last day in Haiti, we lectured to 40 pediatricians at the Haitian Pediatric Society. In the main medical society building with only one barely functioning toilet and 20-30-year-old books on the shelves, we tried to teach these eager doctors the signs and symptoms of diabetes in the young to improve the near 85% mortality rate at onset. If they don’t recognize diabetes, start IV fluids, give insulin, and reverse the severe metabolic disturbances of uncontrolled diabetes at diagnosis, there is no chance these kids will survive.

Don’t we owe them more than that?