Each year, November 14 marks World Diabetes Day. This day is set aside to increase awareness of the disease, and educate the public about diabetes risks and prevention. November 14 was chosen by the International Diabetes Federation as World Diabetes Day because it is the birthday of Frederick Banting who, along with his colleague Charles Best, first isolated insulin. Banting received the 1923 Nobel Prize in Medicine for his work.

We can’t afford to ignore non-communicable diseases, including diabetes. Arogya World is committed to changing the course of chronic disease and we have done our bit to mark this important day. A few days ago, on November 11, we launched the framework for our Healthy Schools and Healthy Workplace Seals of Approval in India, new programs to fight diabetes in India, where the incidence of diabetes is extremely high and growing.

In addition, on World Diabetes Day, November 14, we held a successful public awareness event in Dilli Haat, a busy handicrafts bazaar in Delhi, to raise awareness about diabetes and that it can be prevented through exercise and diet. We distributed approximately 4,000 educational flyers in Hindi and English, 1,000 bookmarks and hundreds of caps. 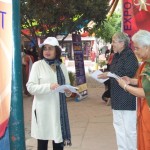 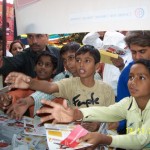 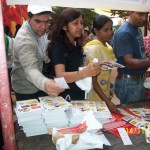 And we shared Hemant Mathur’s new recipe for the diabetes friendly after school snack created for Arogya World in time for World Diabetes Day, with the press and public in Delhi and Philadelphia as well as on our website.

In 2009, the World Diabetes Day Blue Monument Challenge was launched, with 2036 buildings being lit in blue to mark the day. The International Diabetes Federation shares a map and list of 2010 participants with photos on their World Diabetes Day website.  Please review to see how much is being done by groups around the world to celebrate World Diabetes Day.

We also wanted to highlight that November is National Diabetes Awareness Month in the United States. And Amy of the Diabetes Education Blog (from the American Association of Diabetes Educators) provides information about several awareness campaigns and invites people to get involved.

And we wanted to bring you yet another viewpoint – Jenny of Diabetes Update says that every day is Diabetes Day for people with the disease, and expresses her impatience with “Slactivism,” or media events that don’t change anything, but “make you feel like you’ve done something.”