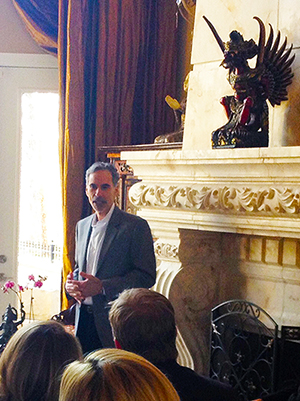 On March 30, a large group wellness enthusiasts gathered in Arogya World Founder & CEO Nalini Saligram’s home in Chicago to learn more about Arogya’s accomplishments in the past year and to meet Dr. Robert Kushner, who runs the Center for Lifestyle Medicine at Northwestern Memorial Hospital. Dr. Kushner believes in the power of lifestyle change—even over medicine—as an effective solution for non-communicable diseases (NCDs).

Joined by his wife Nancy, Dr. Kushner shared his passion for helping patients discover their diet “personalities.” Matching these personalities with healthy food choices and behaviors that fit their lifestyles, he said, will ultimately protect them from obesity-related diseases.

“Healthy Living is everyone’s responsibility—and within everyone’s reach,” said Dr. Kushner. “The trick is to make small, achievable, repeated behavior change and sustain them over time.”

The assembled guests learned how Dr. Kushner is using his platform as a medical practitioner and leader to influence medical students. As they move on to their careers, he feels, doctors can encourage their patients to make healthy living a practice—one that can have a positive and far-reaching impact not only in the U.S. but also in parts of the world where NCDs prevalence is increasing at an alarming rate and treatment is less available.  “I believe that if large numbers of future doctors are trained in how to help their patients make lifestyle changes, we can make a big difference,” he said.  We at Arogya World hope more universities and teaching hospitals will follow Dr. Kushner’s lead.

When specifically asked about low-carb versus low-fat diets, Dr Kushner opined that different diets work for different people. But he said any new diet that declares that the collective wisdom of the last 40 years is wrong, must be taken with caution.  Dr Kushner’s remarks gave everyone much food for thought.

Arogya World also celebrated its fourth birthday at this event and guests, many of them Arogya’s donors and supporters, marveled at the organization’s accomplishments even in the three short months of this year: the start of a global survey of 10,000 women on NCDs, preliminary work to start a smoking cessation program using mobile technology in India, and Arogya World’s participation in the United Nations’ Every Woman Every Child movement by committing to teach 10,000 children in India about diabetes prevention.

“To win in the fight against NCDs, everyone must do their part,” said Parminder Batra, an Arogya World Board member. “At Arogya World, we have made a promising beginning, but we need the concerted efforts of people like Dr. Kushner to bring awareness to the issues and share the skills necessary to effect change. Policymakers, governments, restaurants and fast food chains, and the entire private sector will need to move towards the same goal of healthy living to make effective and lasting change.“

After Dr. Kushner’s remarks, guests enjoyed healthy Irish and Indian treats, and shared recipes with each other.

This gathering served as a precursor to Arogya World’s annual fundraiser, to be held Saturday, May 17 beginning at 6:30 p.m. at the Golden Triangle in Chicago. The co-chairs for this upcoming event—Randy and Heather Nornes and Raja and Priya Krishnamoorthi—were also at Dr. Kushner’s talk. For more information on the May 17 event, call (630) 833-7722.